A lot of important news today.

Let me spend a while discussing these build system improvements now, as these are quite important for the future of the project, I think:

Another problem we’re facing is how to avoid potential targeted attacks on us when we’re building Qubes binaries, such as ISOs or updates. E.g. we trust Fedora and Debian Projects to produce un-backdoored (but not necessarily flawless!) RPM and DEB binary packages, which we subsequently use to build Qubes templates and Dom0/installation images. I believe it is reasonable for us to make such a trust decision, because these projects are widespread and if they decided to publish (and sign) backdoored binaries, they would be risking getting caught red-handed. However, given Qubes extreme focus on security and its attractiveness for various “interesting targets”, it’s absolutely thinkable that an adversary, who somehow got access to Fedora or Debian projects binary singing keys, might be able to target the Qubes developers who are responsible for building the ISOs and/or the updates, and provide them with backdoored packages, still correctly signed by the distro key.

Finally, there is a problem of trusting us, the Qubes developers, that we really are not malicious and produce and distribute un-backdoored binaries and ISOs, matching indeed the source code we publish. Or that our build systems/VMs are not compromised. Or that our singing keys are not stolen (e.g. through EM leaks).

We believe we can address most of these concerns with the following mechanisms:

We have already implemented #1 (sandboxed builds) by introducing support for building templates in Disposable VMs (see here for details). This will now allow to maintain separate repos for different templates (Fedora, Debian, Whonix, etc.) with different people responsible for each, and without the need to trust all of them (or carefully look at their hands!).

We have also implemented #2 from the list above by using TorVM as a default netvm for all the VMs used for the 3.0 rc1 ISO build (as per #1 there are now more than one involved). As an alternative/additional way to prevent developer targeted attacks, we have considered to implement a variation of a scheme proposed by Patrick Schleizer of Whonix, but modified in such a way that our builder produces a list of hashes of all the downloaded components used for the build (rpm/deb packages, tgz sources, etc.), but ultimately didn’t implement it due to other things getting higher priorities (but still would welcome patches to enable such functionality).

Finally, we have also made quite some progress in implementing #3 from the list above. This was done by simplifying the template packaging (i.e. getting rid of all the auxiliary files, such as icon or appmenus, that we can create later, using the trusted code). This way it is now possible for a user, who is about to install a potentially untrusted, community-contributed template package in Dom0, to verify it won’t compromise the system (by simply reviewing its metadata and simple install scripts). In the near future we plan on moving to a better packaging for the templates (and also unify them with VM backups packaging, and make these also more suitable for VM migration/sharing) and to automate this process even more, so that all the template packages were ultimately treated as untrusted by default, always, without any user action required.

The #4 would be most challenging to get, as currently most projects, including all Linux distributions, do not build deterministically (i.e. various people building from the same source code are getting different binaries). Deterministic builds are, of course, a pre-requisite for this multi signature scheme for use on ISOs and updates. However, all the work we have made to sandbox the build process for (untrusted) components, such as the templates, is also crucial here, as we want to make it safe for many parties to be able to build Qubes and provide hashes for the binaries independently.

Speaking of our plans, the diagram below shows the roadmap for the rest of the year for Qubes 3.x and beyond (click here for a full size image): 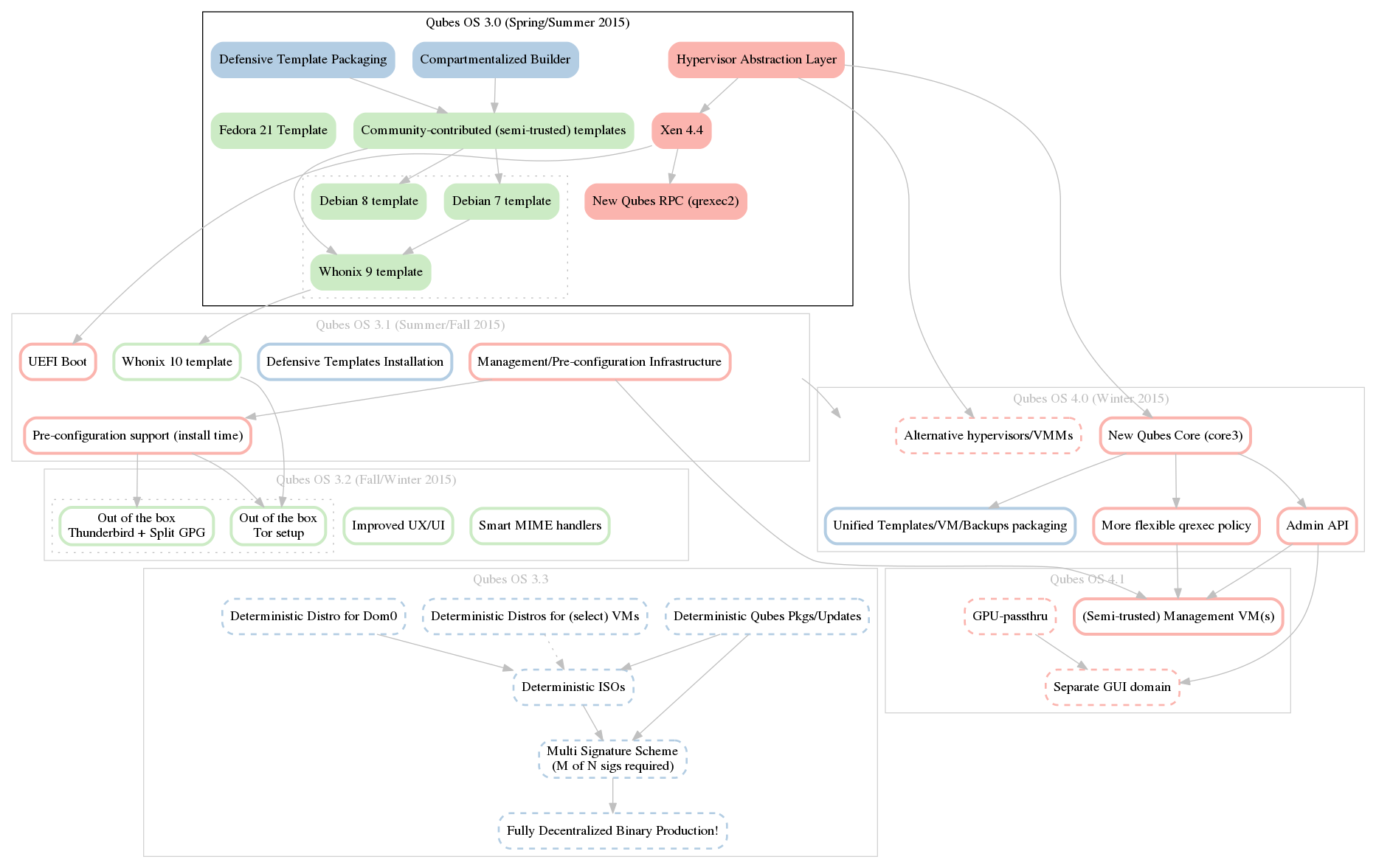 The major new feature coming in the next release (Qubes 3.1) is the management and pre-configuration infrastructure. This is gonna be a basis for both remote management (e.g. for corporate Qubes editions) and also for preparing customized Qubes editions/configurations for specific users/use cases. More on this important topic in an upcoming article.

We have also invested a lot of work into what we call “core3”, our next generation Qubes management stack, mostly rewritten from scratch by Wojtek Porczyk and Marek Marczykowski-Górecki. We have originally planned to base Qubes 3.0 on this new core3 stack, but the changes turned out to be too intrusive and we decided to release Qubes 3.0 using the previous core2 (which is essentially a Marek’s rewrite of the original core I did for Qubes R1, and which we used throughout Qubes R2), and delay the introduction of core3 until… Qubes 4.0, planned sometime at the end of the year). In the meantime 3.1, and 3.2 releases will bring additional features on top of the 3.0 we’re releasing today, such as the management and preconfiguration support mentioned above.

We now also have a qubes-roadmap repo which tracks the high-level release roadmap for 3.x and 4.x, and the diagram above was generated out of this repo. We’re also planning to introduce qubes-architecture repo with a collection of current documents about Qubes OS architecture, both implemented, as well as planned for upcoming releases. Stay tuned!

Speaking of releases and roadmap, it’s worth mentioning we have decided to slightly change the release cycle for Qubes. The new scheme is modeled after the Linux Kernel release cycle. More on this can be read here.

One important improvement that hasn’t been illustrated in the roadmap diagram is the introduction of many automatic tests into our build system. We hope that in the near future this will result in Qubes 3.x releases reaching production quality much quicker than the earlier R1s and R2s did.

Finally, as many of you has undoubtedly seen, over the last weeks we have decided to migrate our servers infrastructure out of our private servers (hosted at AWS) to public services: GitHub.com and SF.net. This is part of a larger plan to decentralize our project (see above), as well as provide better integrity protection for some additional resources, such as the documentation (the Trac wiki we used previously could not provide any form of integrity protection, which we can now achieve thanks to git signed tags). This is for similar reasons I decided to move my blog to git/GitHub.com (See my previous post for more explanations).

The new Qubes 3.0 ISO can be downloaded from here. This is the first official Qubes OS ISO built and signed by Marek Marczykowski-Górecki, instead of by myself. As I have recently been involved in a New Project, I decided to hand off the signing keys for Qubes Release 2 and 3 to Marek. Everybody who has been following Qubes development in the recent years know Marek very well, I’m sure, and realize he has been the lead developer of Qubes OS for a while now. For the record, I still plan on playing a role of Qubes long-term architect/milestones planner. And I also still keep the Qubes Master Key ;)