Qubes OS is becoming more and more advanced, polished, and user friendly OS.
But Qubes OS, even as advanced as it is now, surely have its limitations. Limitations, that for some users might be difficult to accept, and might discourage them from even trying out the OS. One such limitation is lack of 3D graphics support for applications running in AppVMs. Another one is still-far-from-ideal hardware compatibility – a somehow inherent problem for most (all?) Linux-based systems.
There is also one more “limitation” of Qubes OS, particularly difficult to overcome... Namely that it is a standalone Operating System, not an application that could be installed inside the user's existing OS. While installing a new application that increases system's security is a no-brianer for most people, switching to a new, exotic OS, is quite a different story...
Before I discuss how we plan to address those limitations, let's first make a quick digression about what Qubes reallyis, as many people often get that wrong...
What Qubes IS, and what Qubes IS NOT?
Qubes surely is not Xen! Qubes only usesXen to create isolatedcontainers – security domains (or zones). Qubes also is not a Linux distribution! Sure, we currently use Fedora 18 as the default template for AppVMs, but at the same time we also support Windows VMs. And while we also use Linux as GUI and admin domain, we could really use something different – e.g. Windows as GUI domain.
So, what is Qubes then? Qubes (note how I've suddenly dropped the OS suffix) is several things:
Introducing Qubes HAL: Hypervisor Abstraction Layer
Because Qubes is a bunch of technologies and approaches that are mostly independent from the underlying hypervisor, as discussed above, it's quite natural to consider if we could easily build an abstraction layer to allow the use of different VMMs with Qubes, instead of just Xen? Turns out this is not as difficult as we originally thought, and this is exactly the direction we're taking right now with Qubes Odyssey! To make this possible we're going to use the libvirt project.
So, we might imagine Qubes that is based on Hyper-V or even Virtual Box or VMWare Workstation. In the case of the last two Qubes would no longer be a standalone OS, but rather an “application” that one installs on top of an existing OS, such as Windows. The obvious advantage we're gaining here is improved hardware compatibility, and ease of deployment.
And we can go even further and ask: why not use Windows Native Isolation, i.e. mechanisms such as user account separation, process isolation, and ACLs, to implement domain isolation? In other words why not use Windows OS as a kind of “VMM”? This would further dramatically improve then lightness of the system...
Of course the price we pay for all this is progressively degraded security, as e.g. Virtual Box cannot be a match to Xen in terms of security, both architecturally and implementation-wise, and not to mention the quality of isolation provided by the Windows kernel, which is even less. 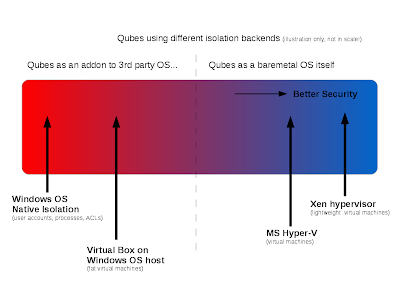 But on the other hand, it's still better than using “just Windows” which offers essentially only one “zone”, so no domain isolation at all! And if we can get, with minimal effort, most of our Qubes code to work with all those various isolation providers then... why not?
Being able to seamlessly switch between various hypervisors is only part of the story, of course. The remaining part is the support for different OSes used for various Qubes domains. Currently we use Linux, specifically Fedora 18, in our GUI & Admin domain, but there is no fundamental reason why we couldn't use Windows there instead. We discuss this more in-depth in one of the paragraphs below.
The diagram below tries to illustrate the trade-offs between hardware compatibility and ease of deployment vs. security when using different isolation backends with Qubes. Some variants might also offer additional benefits, such as “super-lightness” in terms of CPU and memory resources required, as is the case with Windows Native Isolation. 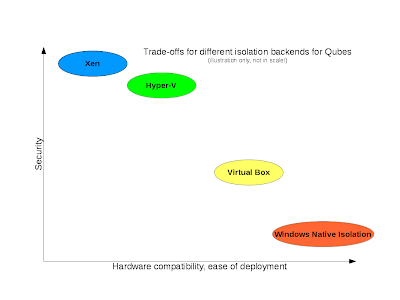 Some example configurations
Let's now discuss two extreme variants of Qubes – one based on the baremetal Xen hypervisor and the other one based on Windows Native Isolation, so a variant from the opposite endof the spectrum (as shown on the illustration above).
The diagram below shows a configuration that uses a decent baremetal hypervisor, such as Xen, with abilities to securely assign devices to untrusted service domains(NetVM, UsbVM). So, this is very similar to the current Qubes OS. 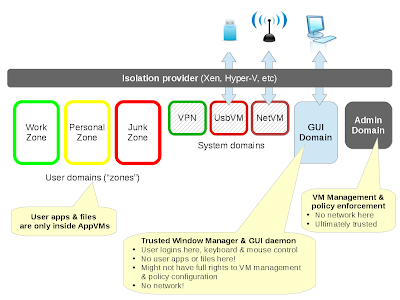 Additionally weseeseparate GUI and Admin domains:the GUI domain might perhaps be based on Windows, to provide users with a familiar UI, while the Admin domain, tasked with domain management and policy enforcement,might be based on some minimal Linux distribution.
In the current Qubes OS there is no distinction between a GUI and an Admin domain --both are hosted within one domain called “dom0”. But in some cases there are benefits of separating the GUI domain from the Admin domain. In a corporate scenario, for example, the Admin domain might be accessible only to the IT department and not to the end user. This way the user wouldhave no way of modifying system-wide policies, and e.g. allowing their “work” domain to suddenly talk to the wild open Internet, or to copy workproject files from “work” to “personal” domains(save for the exotic, low-bandwidthcovert channels, such as through CPU cache).
The ability to deprivilege networking and USB stacks by assigning corresponding devices (NICs, and USB controllers) to untrusted, or semi-trused, domains provides great security benefits. This automatically prevents various attacks against the bugs in WiFi stacks or USB stacks.
What is not seen on the diagram, but what is typical for baremetal hypervisors is that they are usually much smaller than hosted hypervisors, implementing less services, and delegating most tasks, such as the infamous I/O emulation to (often)unprivileged VMs.
Let's now look at the other extreme example of using Qubes – the diagram below shows an architecture of a “Qubized” Windows system that uses either a hosted VMM, such as Virtual Box or VMWare Workstation, or even the previously mentioned Windows Native Isolation mechanisms, as an isolation provider for domains. 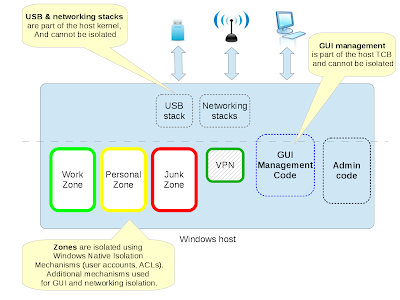