Today, I would like to showcase some of the cool things that one can do with the Qubes networking infrastructure, specifically with all the new features that have been brought by the just released Qubes Beta 2. This will cover the use of multiple Net VMs for creating isolated networks, the use of a Proxy VM for creating a transparent Tor Proxy VM, as well as demonstration of how to use a Standalone VM with manually assigned devices, to create a “WiFi pen-testing” VM, which surely represents the “for fun” aspect of this post.

From the networking point of view there are three types of VMs in Qubes:

The virtual interfaces in client VMs are called ethX, and are provided by the xen_netfront kernel module, and the corresponding interfaces in the Net/Proxy VM are called vifX.Y and are created by the xen_netback module.
Each Net and Proxy VM implements NAT, specifically masquerading, for all the connected VMs. Additionally to this SNAT, each Net or Proxy VM provides also DNAT redirection for DNS resolutions, so that each VM behind a Proxy or Net VM thinks that it uses a DNS in the Net/Proxy VM, but in fact all the DNS request are DNAT-ed by all the Proxy and Net VMs down the original DNS that is provided to the final Net VM. This smart trick allows us to avoid running a DNS caching server in Proxy/Net VMs.
Also, any VM-to-VM traffic, among the VMs connected to the same Net/Proxy VM is blocked by default.
Additionally, each Proxy VM enforces system-wide firewaling rules, specifically the rules for all the directly connected VMs. Those firewalling rules are centrally managed in Dom0 and exposed to each Proxy VM through Xen store. One useful application of this firewalling mechanism is to limit certain VMs to only specific type of white-listed traffic to minimize likelihood of user mistakes. A good example could be a work VM that might be limited to network connectivity only with the select corporate servers and denied all other traffic. This way, when the user receives an email message with an embedded http link (possibly leading to a malicious website) and accidentally clicks on it, nothing wrong happens.
The current infrastructure doesn't support IPv6 routing, but we will likely add this support in the upcoming Beta 3.
The default networking topology in Qubes OS

When you proceed with the default installation of Qubes Beta 2, then your initial networking topology looks like on the diagram below:
So, by default there is one Net VM, called 'netvm', that is automatically assigned all the networking devices in the system. There is also one Proxy VM, called 'firewallvm' that is directly connected to the default Net VM, and which provides networking to all other VMs in the system. This Proxy VM is used for firewall rules enforcement. Each such service VM consumes 200MB of RAM by default.
Network-isolated VMs
For some VMs it might be desirable to completely disconnect them from any kind of networking access. This can be easy done using the following command (issued from Dom0's konsole):
[dom0]$ qvm-prefs -s netvm none
For example I have a 'vault' VM that I use for keeping my master PGP keys, and other secrets, and this machine is not connected to any network.
Using multiple Net VMs for physically isolated networks
In some scenarios the machine might be connected to two or more physically separate networks (e.g. safe corporate intranet, reachable via ethernet cable on the user's desk, and the unsafe and evil Internet, reachable via WiFi card).
It is easy to use more than one Net VMs in Qubes, and assign different networking devices to different Net VMs, and also decide which VMs are connected to which Net VMs. The diagram below presents an exemplary such setup:
We could created such a setup using the following commands (issued in Dom0):
[dom0]$ qvm-create netvm1 --net --label red
[dom0]$ qvm-create netvm2 --net --label yellow
Currently qvm-create when used with the --net option automatically assigns all networking devices to the just created VM, so in the example above you would want to remove extra devices from each Net VM using qvm-pci -d, leaving only those you really want, e.g.:

[dom0]$ qvm-pci -d netvm1 02:00.0
Now we should create the Firewall VMs:
[dom0]$ qvm-create firewallvm1 --proxy --label green
[dom0]$ qvm-create firewallvm2 --proxy --label green
... and connect them to proper Net VMs:
[dom0]$ qvm-prefs -s firewallvm1 netvm netvm1
[dom0]$ qvm-prefs -s firewallvm2 netvm netvm2
And now, for any other VM, just set the appropriate Net VM (either firewallvm1 or firewallvm2, or 'none), to get it assigned to either of the isolated networks, e.g.:
[dom0]$ qvm-prefs -s banking netvm firewallvm1
[dom0]$ qvm-prefs -s xfiles netvm firewallvm2
[dom0]$ qvm-prefs -s vault netvm none
...
This configuration provides very strong isolation between the VMs belonging to network #1, and the VMs belonging to network #2. Specifically, this becomes significant if we fear about potential remotely exploitable bugs in the client code of the core TCP/IP stack (in this case the Net VM could potentially compromise all the connected VMs -- but the same problem applies to even physically separated machines that use the same network).
Setting up Tor Proxy using a Proxy VM
Let's now play a bit with Proxy VMs and see how we can use it to create a simple Tor proxy VM. Such a VM would provide anonymized networking to all its clients, so would allow to easily create VMs for anonymous Internet access. The simple setup we would like to prepare is depicted on the figure below:

Our Tor proxy would forward only the Tor traffic, so we don't have to fear about some Tor-not-aware applications, or even intentionally malicious ones to compromise the privacy of our connection. This is because such applications have no way to generate traffic to the outside world without going through our Tor proxy (unless they could exploit a hypothetical vulnerability in the Tor process running in the Tor VM). Also, the applications running in any VM behind the Tor proxy are not able to determine any globally identifiable IDs, such as the user's external IP address, the real MAC address used by real NICs, etc.
Interestingly just after writing the above paragraph, I discovered that one of our xenstore keys had wrong permissions and, as a result, any VM could read it and get to know the actual external IP (the key is used by a Net VM to communicate the external IP configuration to the connected Proxy VMs, so they could know when to update the firewall configuration). The fix for this problem is here, and the update (qubes-core-dom0-1.6.32) is now available for Dom0 (just do qvm-dom0-updateto get it installed).
So, this represents a rather strong setup for use with Tor. Let's now have a look at how to practically create such a configuration, step by step.
First, let's create the VM that will become our Tor proxy:
[dom0]$ qvm-create torvm --proxy --label green
This will create a Proxy VM named 'torvm', based on the default template. We will need to now start the template VM and install the Tor client there:
[dom0]$ qvm-run -a fedora-14-x64 gnome-terminal
Alternatively, if we didn't trust the Tor client rpm package to be non-malicious, specifically for its installation scripts to be non malicious, we could have based this on a different template, e.g. one used for less trusted VMs, or we could installed the Tor client in /usr/local, that is backed by the VM's private storage, but this would require compiling Tor from sources.
Now, in the just started template VM, lets install the Tor client and (optionally) the Vidalia graphical frontend:
[fedora-14-x64]$ sudo yum install tor vidalia
And then power off the template VM. Now, every VM based on this template, started after the template shutdown, will also see the Tor binary in its filesystem.
Let's now configure our torvm to properly start Tor proxying at boot:
[dom0]$ qvm-run -a torvm gnome-terminal
Now, we will create the following script for starting up the Tor transparent proxy and setting up traffic redirection using iptables:
[torvm]$ vim /rw/config/start_tor_proxy.sh
...and now paste the following into this file:

Except for the “QUBES_IP=$(xenstore-read qubes_ip)” line that reads the torvm's IP address, there is nothing Qubes-specific in the above listing. It's just a standard way of setting up transparent Tor proxy.
It is important that this file be located in the /rwdirectory, as this directory is backed by the VM's private storage and will survive VM reboots. The VM's root file-system is read-only and all the changes to it are lost on VM shutdown (VM gets an illusion of the root fs being writeable thanks to Copy-On-Write mechanism, but the actual COW backing device is cleared upon each VM shutdown).
We should also modify the /rw/config/rc.localscript, to ensure that our Tor proxy is automatically started -- just paste the following into this script:

Finally we should also provide a script that would restart our proxy in case the user dynamically switched the NetVM, which would result in the completely different routing. This could be done by creating a script with predefined name qubes_ip_change_hookwithin /rw/config/directory:

Make sure that all the scripts are executable (chmod +x). And that's all. Now, shutdown the torvm:
[dom0]$ qvm-run --shutdown --wait torvm
From now on, every time you start the torvm (or when Qubes starts it in response to start of some other VM that uses torvm as its Net VM), the Tor transparent proxy should be automatically started.
Let's test this by creating a VM that would be using the just created Tor proxy:
[dom0]$ qvm-create anon-web --label black
[dom0]$ qvm-prefs -s anon-web netvm torvm
Now, every time you start the anon-web VM (e.g. by clicking on the Web browser icon in the anon-web's start menu), Qubes will also ensure that torvm is up and running, and this in turn would configure all the Tor proxying for this VM.
Fo additional control one might want to use Vidalia, the graphical front end for Tor (this should be installed within the template VM that has been used for torvm). We could easily start Vidalia by just typing:
[dom0]$ qvm-run -a torvm vidalia
We should however make sure to disable "Start the Tor software when vidalia starts" option in Settings/General in Vidalia. Otherwise, Vidalia might kill your original Tor (that has transparent proxy open) and start own without transparent proxy enabled.
Of course one case easily create more VMs that would be using torvm as their Net VM, as so would have anonymized network access. The beauty of this solution is that in case one of my anonymized VM gets compromised, others do not. Plus, the already mentioned benefit, that no matter whether apps in those VMs are buggy, or even intentionally malicious, they would not be able to leak out the user's external IP address.
Creating a WiFi pen-testing VM
Finally let's have some fun and create a WiFi pen-testing VM. The desired config is depicted below: 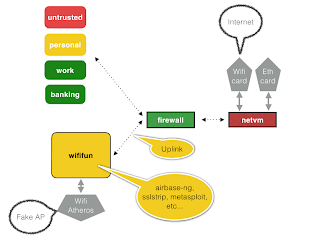